A nurse escorted a tired, anxious young man to the bed side of an elderly man.

"Your son is here," she whispered to the patient. She had to repeat the words several times before the patient's eyes opened. He was heavily sedated because of the pain of his heart attack and he dimly saw the young man standing outside the oxygen tent.

He reached out his hand and the young man tightly wrapped his fingers around it, squeezing a message of encouragement. The nurse brought a chair next to the bedside. All through the night the young man sat holding the old mans hand, and offering gentle words of hope.

The dying man said nothing as he held tightly to his son. As dawn approached, the patient died. 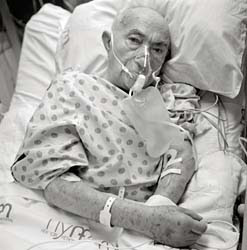 The young man placed on the bed the lifeless hand he had been holding, and then he went to notify the nurse.

While the nurse did what was necessary, the young man waited. When she had finished her task, the nurse began to say words of sympathy to the young man.

But he interrupted her.

The startled nurse replied, "I thought he was your father."

"No, he was not my father," he answered. "I never saw him before in my life."

"Then why didn't you say something when I took you to him?" asked the nurse.

He replied, "I also knew he needed his son, and his son just wasn't here. When I realized he was too sick to tell whether or not I was his son, I knew how much he needed me..."

the man's act might appear strange to us...yet imagine the dying man's grief in knowing that his dear son is not there when he truly needs him...
there's no harm in doing a little kindness : a small kindness goes a long way.
muscom at 6:18 AM